23 years ago I was a 17-year old high school student living the time of his life… It’s very difficult to describe that feeling when we saw the communist regime crumble before our eyes. The hated regime, which prevented people from freely realising themselves, which massaged our brains with communist propaganda on a daily basis, which lied to you, which sent dissidents to jail, which employed an army of spies to grass on you…. But in those cold November days in 1989 we suddenly saw the unthinkable happen. It was not a complete surprise – there had been signs of the regime becoming weaker and weaker – but it was still incredible to see it fall like a house of cards.

With hindsight, we must have looked like a nation under drugs. The sense of excitement and infatuation was palpable. In those few weeks in November and December 1989 we were different people. On the way back from the daily demonstrations against the regime, as the participants were taking public transport, everybody shared jokes, people were being nice and friendly. The feeling that we were fighting for our freedom was like manna from heaven, it was a collective opiate that we all rushed to devour.

No more communist education at schools, the borders were about to be opened, we were to see the mythical “West” with our own eyes. Vienna, a forbidden city for a long time, was to become accessible to all of us. A number of interesting people, that few of us had heard about before, alighted from their underground hideaways. Poets, philosophers, writers, activists… 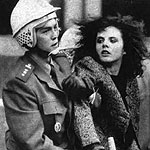 The grey, ugly country was becoming more colourful day by day. We were astonished to see how many talented people there were who could not express themselves. When we heard that Václav Havel, the dissident playwright and philosopher, the arch-enemy of the state who spent several years in a political prison, became the official candidate for the President of the country, it was like out of Alice in Wonderland. When we saw him giving speech in the US Congress the next spring, we cried.

Of course, while we were enjoying our collective ecstasy, the vultures were already flying high above, surveilling the territory, looking for the preys, scheming… While the fellowship of the ring was engaged in long discussions about what to do next with their task, the orcs were joining forces and planning the counter-attack. Our naiveness was only our fault and nobody elses, though there were no manuals of how to behave in those unprecedented times….

23 years on, it’s a completely different world we live in. The challenges have changed. But I feel that the story of the Velvet revolution in November 1989 in Czechoslovakia is still inspiring.

It was a rainy night. We were a little tired and not really willing to go out but in the end we were very happy we did, if it were only for a single performance that we saw: GUILLAUME BRUÈRE RENDRE AUX ÉGYPTIENS L’OBÉLISQUE. It took place in a huge tent by the Jardin des Tuileries. In the middle of the tent there was a huge, twenty-metre long table. Behind the table, a man, Guillaume Bruère with his ever present helper, a woman in a leather jacket who listened to and fulfilled all his wishes including bringing clean water to dip his brushes in, sharpening the pencils, moving a tray with all his tools along the table… The most fascinating thing was his frantic manner of drawing – as if he were running against the time, he drew shapes, hieroglyphs, strange outlines, first of all drawing them with the pencil (often holding a pencil in each hand and drawing simultaneously), then filling the shapes with colour in a very rushed, impatient way, moving along the table in all directions.. It was fascinating to see the shapes emerge from the white paper. It was exciting to see the creative process unfolding. We stood by his table for good twenty minutes but he never stopped, just moved on and on, filling the white void with images from his imagination. As we were leaving, dead tired, looking forward to bed, we realised that he was to be there the whole night, standing behind the table, drawing… Hats off to you Mr Bruère!

Don’t know if you are familiar with haiku, these short, three-line, poems of Japanese origin, made famous by zen monks… I remember not being overwhelmed when I first encountered them in the cult bookshop the Artforum in my then hometown Bratislava. I was 18 or so and I did not see the point of reading these short poems about “nothing”. And they did not rhyme, so what the heck. I was young, too restless… I could not imagine sitting down to read poems about frogs jumping into fish ponds. Well, at that age I did not see the point of many other things either… Fast forward 15 years or so, I’m living in Paris with my fiancee who is (among other things) a writer of haiku! In French. And, her being a member of the Francophone community of writers of haiku, here I am with her in a Parisian bistro at an event called “kukai”, which is a Japanese term for an atelier of haiku. Around the table 15 people of different age bringing their own haiku, talking about them, voting for them. Outside the windows the hustle and bustle of Paris, inside the people are talking about butterflies in cemeteries, drops of water, flowers in bloom… We leave relaxed, refreshed and already look forward to another kukai in a month’s time!

Having decided to take an unpaid leave from work and try doing something else, it was Paris that we settled upon with my fiancee as our new place of residence for at least a year. After spending a month in clean and well-organised Japan, moving to Paris was a bit of a shock. We rented a small studio in Montmartre with a leaking toilet that was actually placed in the room, being only cordoned off by a thin partition. It was on the ground floor and the window was so low that if a bigger dog wanted to, he could have peed straight into our room. The wooden shutters were cool, though, and I always liked the moment in the morning when one of us undid the metal latch and pushed the folded shutters to the sides of the window. The first thing we could usually see in the morning were the legs or the hind parts of a pair of tourists strolling down our street in the direction of the Sacre Coeur. “Aber ja, Mathilde, es ist hier, kuk mal nach links!”

There was a Greek “traiteur” on the other side of the street who used to sit outside the shop in the evenings with his notebook and one could almost imagine the scene taking place somewhere in the Peloponese and not in rue Andre Barsacq in Paris. We got to know each other after a while and exchanged friendly nods. In the warm May evenings we sometimes went for a walk along the curvy lanes of the hill, discovering quiet, scenic squares, where the local inhabitants would descend to smoke a cigarette on the bench while their dogs would roam around sniffing the warm evening air.

Aaah Montmartre! Living there had its charm but when an opportunity knocked three weeks later, we did not hesitate and moved to a slightly bigger apartment with a proper toilet in the 15th near Parc George Brassens. It’s the small things that matter the most, don’t you think? 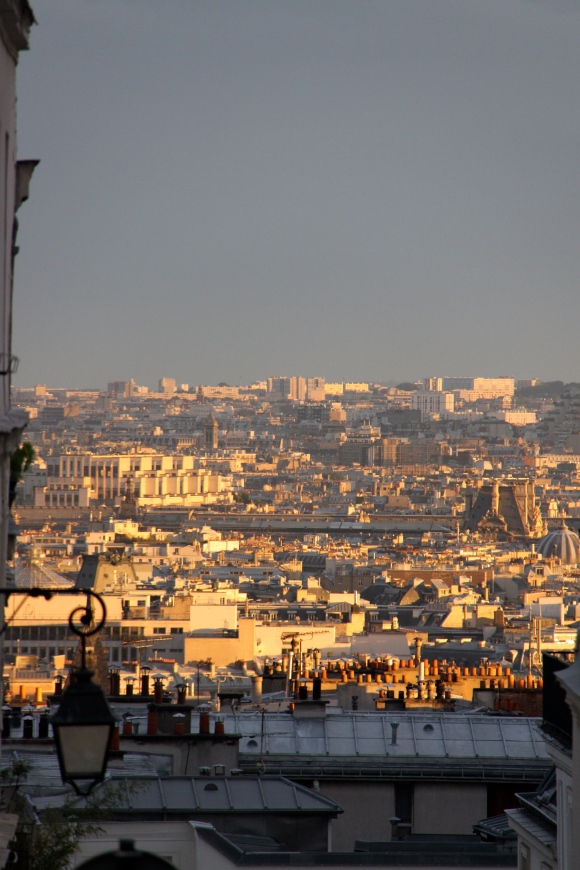